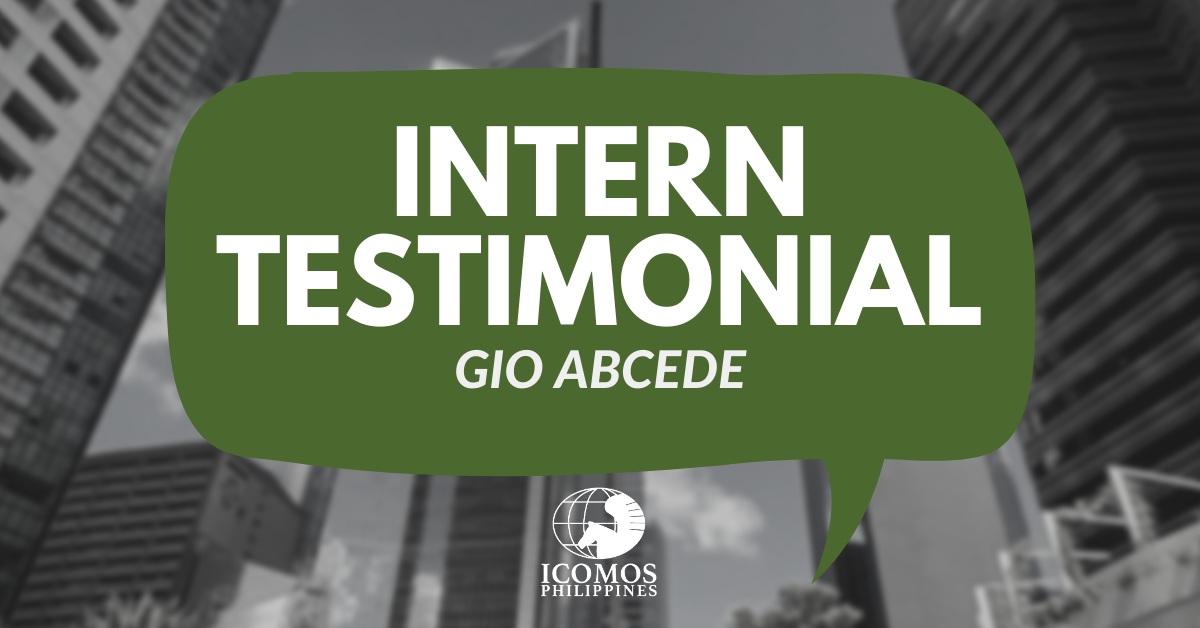 During my internship, I was exposed to the different projects of the Architects Committee–from contributing to their Focus Group Discussions, to researching on the International Scientific Committee on Twentieth Century Heritage (ISC20C), and to delving into the topics for the proposed CPD Talks on proper adaptive reuse strategies and design principles application to historic buildings. These involvements enabled me to get a better understanding of what constitutes a good conservation and adaptive reuse project. Insights gathered from ISC20C advocacy projects and initiatives, which can be helpful in resolving 20th century structures’ demolition issues, and the various case studies encountered during this research aided the discussion in how to work around the challenges architects may face regarding conservation parameters.

Other than the work for the Architects Committee, I was also exposed to more heritage research by contributing to Project Alexandria and working on the ICOMOS Philippines Online Library which both helped me gain a more comprehensive look into the current heritage conservation landscape in the Philippines. Moving forward with my architectural and documentation work, the learnings that the experience offered to me by ICOMOS, my mentors and its members is something that I am extremely grateful to have.

“Through the guidance of my mentors in ICOMOS Philippines, I was able to get a better understanding of what constitutes a good conservation/ adaptive reuse project. We looked into local and international case studies and discussed what challenges architects face in the process of designing with conservation parameters.  I hope to carry these insights and instill them in design principles for my work in Architecture and documentation projects.”

I will be completing my thesis, a proposal on a values-based adaptive reuse guide using a typo-morphological analysis of Avenida Rizal, in hopes to stir the discussion of how heritage values may be better interpreted by designers/architects. I am also taking on projects that create virtual tours for tourist destinations and heritage sites around the Philippines. I hope to get more experience in fields relating to heritage work and eventually return to ICOMOS and contribute more as a member.

Ruby Descalzo is a recent graduate of the Ateneo de Manila University, with a degree Environmental Science and a minor in Cultural Heritage Studies. She previously served as the President of Baybayin Ateneo, a Filipino cultural student organization. She aspires to pursue studies on ethnoecology and to contribute to the conservation of the Philippines’ biodiversity and traditional ecological knowledge.

Ruby chose to intern for ICOMOS in order to grow as a young professional in the field of cultural heritage. She hopes to use her skills in GIS and statistics for Project Alexandria and under the tutelage of member Claudia Montero, she will help develop the graphic portfolio and database of the organization.

Gio Abcede is a graduating BS Architecture student from De La Salle University, College of Saint Benilde. He has worked with One/Zero Design Co. on the Maestranza Creative Quarters project and collaborated with Digiscript Philippines Inc. with mapping presentations for the Intramuros Cultural Management Plan. He is also a core member and graphic designer for the Heritage Conservation Society.

Gio sought an internship with ICOMOS Philippines to learn how to gather data on heritage structures efficiently and to find solutions geared towards heritage-driven development. He hopes to contribute his current research and thesis focused on the role of typo-morphological analysis and cultural significance assessment in identifying adaptive reuse opportunities in Manila. He will be working closely with the Architecture Committee of ICOMOS Philippines and will be supporting the organization with planned webinars and online courses.

Welcome, Ruby and Gio! We’re very pleased to have your assistance.

2. We particularly note with approval the NHCP’s declaration that outlines the significance of RMSC as a historical site – as a venue for the Far Eastern Games and in subsequent athletic, religious. political, and social events; its role in World War II and its reconstruction thereafter; and its architectural design in the Art Deco style by Juan Arellano, one of the country’s most significant architects.

3. Having thus outlined the statement of significance of the site, it is the duty of the cultural agencies, consistent with international best practices, to require the preparation of a conservation management plan (CMP) by qualified experts, under its control and supervision, to ensure that the significance of the site is respected and preserved.

6. We reiterate our support for progress and development, and recognize the need for cities to evolve, but in the context of the sustainability of cultural significance through conservation, as provided under Republic Act No. 10066.

Post Script Note: ICOMOS Philippines created a small working group which submitted a World Monuments Watch Nomination for its 2018 cycle. Research findings were shared by Gabriel Caballero at the mASEANa conference in Jakarta that happened in January 2018.

The workshop encourages the participants to:

We are hoping to see your representative/s attend the workshop and aid us in promoting the Conservation Principles that your chosen participant would surely learn.